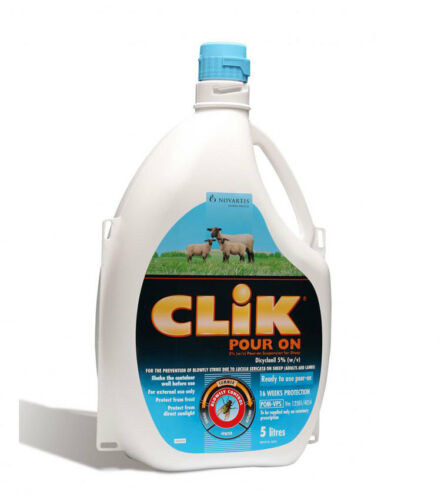 Add to cart
Delivery & returns info
About this product

Clik Pour on for the prevention of blowfly strike in sheep with 16 weeks protection.

Dosage and Administration:
Shake well before use. Always read the label.

Clik is administered once, before or at the beginning of fly activity. As cases of an earlier strike can occur, it is good practice to check animals regularly for blow strike. Administer with a manual or automatic dosing gun with a spray nozzle as this gives best spreading of Clik on the fleece. Apply using the four stroke method as below. Do not treat very wet animals and do not apply during heavy rainfall.Four stroke method:

The Four Stroke Method:
The four stroke method ensures the pour-on is applied evenly by applying a quarter of the application at a time in four simple strokes.